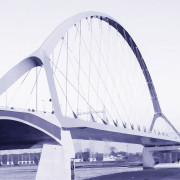 Commissioned by CBK Nijmegen, Dutch filmmaker Martijn Schinkel made a short, poetic, almost silent, little documentary about a bridge as a monument.

On September 20, 1944, 48 American paratroopers of the 82nd Airborne Division lost their lives during the heroic crossing of the River Waal at Nijmegen. This battle was crucial in the liberation of Nijmegen. A memorial commemorates this military action. And a role of honor lists the names of these men. The new city bridge opened in 2013 connecting the banks of the Waal on the exact location of this historical crossing.  Lights Crossing is the title of an integrated work of art by Atelier Veldwerk. It marks the bridge as a monument and makes it the largest war memorial in the Netherlands. Every single day when darkness falls the 48 pairs of lights repeat the meaningful crossing.