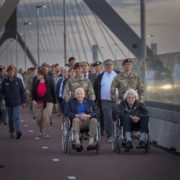 The 1414th Sunset March of Saturday, September, 1 has been a very special one. The daily remembrance march in honor of the 48 killed American soldiers of the 82nd Airborne Division is usually run by some former soldiers. Now hundreds of interested parties were standing on the bridge to applaud the two special participants. Unusual, because the Sunset March is normally sober and subdued. The applause was meant for Roy Hanna and James (Maggie) Megellas. These two 101-year-old American WW2 veterans crossed the River Waal with their Airborne Division 74 years ago in canvas boats to recapture the traffic bridge over the Waal near Nijmegen from the Germans and thus make the advance of the British 30th Army Corps possible. Forty-eight of their comrades died before they could reach the other side of the Waal. For Roy Hanna this was the first time since that 20th September 1944 that he visited this place. Nijmegen Mayor Hubert Bruls spoke words of thanks at the Waal Crossing monument and a minute of silence was held. Bruls hopes that both war heroes can also be present in 2019 at the 75th anniversary of Market Garden. 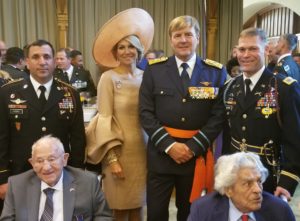