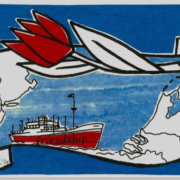 Albany and Nijmegen: an international friendship

From Wednesday 9th June, the exhibition ‘Reconstruction and international friendship’ is on display at the indoor museum of Museumpark Orientalis in Heilig Landstichting. The exhibition is part of the 1st lustrum celebration of the ‘Friendship Albany Nijmegen association’ (FAN). The ‘Nijmegen Wederopbouwstad’, ‘Freedom Museum’ and ‘Groesbeek Airborne Vrienden’ contributed to the exhibition from their collections. The exhibition tells the story of the relief aid from the city of Albany (NY) for the city of Nijmegen after the Second World War and shows us the situation of city of Nijmegen and the town of Groesbeek in a period of reconstruction.

Visitors to the exhibition experience the special connection between an American and Dutch city through old photo material, letters and historical documents, posters, and video. The display shows the importance of international cooperation, friendship, and solidarity between people of different cultures in times of great distress.

An important moment for this international cooperation took place in 1947 when boats arrived in Nijmegen from Albany with 300 tons of relief supplies, including food packages, baby clothes, shoes, and typewriters. The packages were accompanied by letters from the families in Albany to the families in Nijmegen, creating international friendships. Also, the relations between people from the town of Groesbeek and the United States have been -and are still- strong, ever since.

The arrival of the relief supplies was a signal for the people of Nijmegen to start rebuilding the city in good spirits. The many stories and some objects that were included in this cargo can be admired in the exhibition. The exhibit is on display in Museumpark Orientalis until and including Sunday 5th September.

The first anniversary celebration of FAN association was realized with the support of the Dutch Vfonds, U.S. Embassy and DELA.