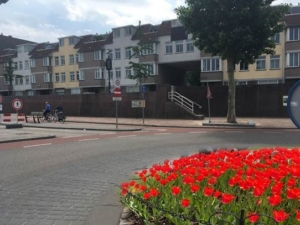 Unveiling of a plaque in memory of the help that the people of Nijmegen received after the war from the City of Albany, NY.

In July, 1947 boats brought 300 tons of humanitarian relief supplies and building materials to the Waalkade in Nijmegen. Mayor Hustinx took delivery of the goods and Polygoon made a film recording “Albany Adopts Nijmegen.”

The confidence and reconstruction of Nijmegen was given a tremendous boost with this American relief operation.

Major General James M. Gavin, commander of the American 82nd Airborne Division, had taken the lead in this effort. General Gavin, who played an important role in the liberation of Nijmegen, pushed for the American aid to alleviate the consequences of the war. On March 25, 1947 Gavin was appointed an honorary citizen of Nijmegen.

The relief operation created a warm friendship between Albany and Nijmegen.

The relief campaign created a warm friendship bond between Albany and Nijmegen. That friendship bond is symbolized by orange tulips. To thank the population for their help, Queen Wilhelmina sent 2,000 tulip bulbs to Albany on behalf of all Dutch people. Blooming tulips were in Washington Park for the first time in 1949 and as a result the “Tulip Festival” was born. Albany and Nijmegen became “sister cities”. Also in Nijmegen, the FAN foundation has included the orange tulip as a sign in its logo.

In Spring 2020, orange tulips will bloom at the roundabout in opposite of the plaque. This initiative is in collaboration with Wijkplan Nijmegen. Unveiling of a display with the coat of arms that General James M. Gavin, honorary citizen of the city, donated to Nijmegen.

A collaborative initiative of the FAN Friendship Albany NY-Nijmegen association, OBS De Oversteek, the Sunset March and others is committed to highlighting the role of American liberators in Operation Market Garden and the honorary citizenship of Nijmegen for General Gavin. At the first commemoration of the liberation of Nijmegen, General J.M Gavin donated an 82nd Airborne Division weapon shield to the city of Nijmegen. The wooden plaque has been stored in the archives for a long time. Protected but unknown and invisible to the residents of Nijmegen. The 75th commemoration and the presence of many American guests compels  the group to display the historic object of the 82nd Airborne Division and to publicize and document the honorary citizenship of General Gavin more widely. The display and explanatory banners will stay in the public entrance of Nijmegen City Hall for another few weeks.

Given the limited space,  this ceremony is only open to invited guests. 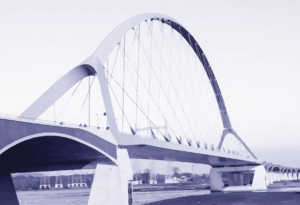 18 september 19.00 p.m. FAN participation in one of the special Sunset Marches.

This year 75 special Sunset Marches are being organized as part of the 75th anniversary of Operation Market Garden, the liberation of Nijmegen. During this liberation, which started on September 17, 1944, American paratroopers from the 82nd Airborne Division crossed the Waal River. 48 Americans lost their lives during this crossing. A new city bridge “De Oversteek” has been built on this location. There are 48 pairs of lights on the bridge, one for every American who died. At sunset, these street lights, one after the other, are lit in the pace of a slow march. Every evening a Dutch veteran walks this Sunset March. 365 days a year. The Sunset March has become a daily tribute since October 2014.

FAN participants gather at 7 pm at the Waal Crossing monument on the north side of the river. 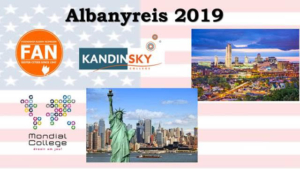 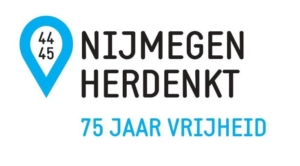 In 2019 we celebrate with the students the bond between the USA and the Netherlands and specifically the 72-year friendship between Nijmegen and Albany NY and the 82nd Airborne Division. We work together with students and teachers from OBS de Oversteek, Kandinsky College and Mondial College.

In a transatlantic project we emphasize the importance of humanity and friendship in post-war reconstruction. We emphasize and value the societal role of soldiers. We work to raise awareness and realization that freedom is not a given and emphasize on a personal commitment.  Together with students from Nijmegen and Albany NY, we work on shared objectives in a number of  “products” and exchange moments.

The educational trip with students from Nijmegen to Albany in October 2019 may be seen as the start of the international exchange, which will also have a follow-up in 2020 and beyond.

In proud cooperation with: 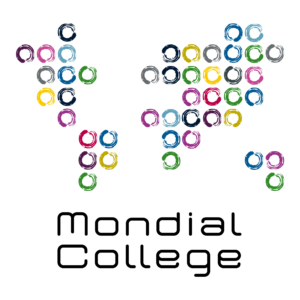 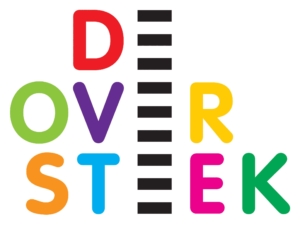 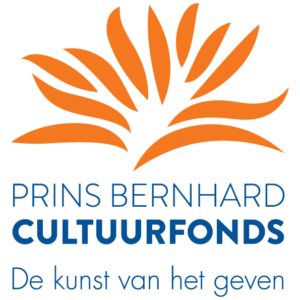