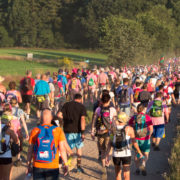 I have just returned from a week’s assignment in Nijmegen, the oldest city in the Netherlands and Albany’s sister city, and I was struck by the restorative power of long walks.

It may not be a prescription for world peace, but the international understanding and goodwill spread during communal walking was underscored by 45,000 people representing 68 countries who walked 25 or 30 miles a day for four consecutive days. They walked seven or eight hours at a stretch and endured searing heat and heavy rains during the 100th anniversary of “The Walk of the World” in Nijmegen (pronounced NYE-may-gun). It’s called the Vierdaagse in Dutch, or the Four Days Marches…