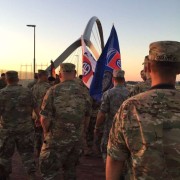 Paul Grondahl recently joined in the 100th anniversary of “Walk of the World,” a massive movable party in the oldest city in the Netherlands, Nijmegen.

Nijmegen, pronounced NYE-may-gun, with a population of 165,000, is Albany’s sister city. The two share a connection that stretches across more than 400 years. Adventurous members of old Nijmegen families settled in 17th-century Beverwyck, the forerunner of Albany.