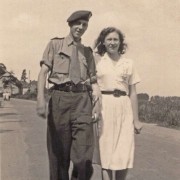 “This is Nijmegen,” a World War II-era Dutch film missing for six decades, a cinematic thank-you to Albany’s citizens for sending a shipload of relief supplies to the war-ravaged city in the Netherlands, has been found.

After years of hunting in dusty archives on both sides of the Atlantic, including three trips to Albany, independent scholarAnja Adriaans was informed that a private collector in Nijmegen has a copy of the 11-minute. black-and-white film commissioned by the Dutch government.

“It’s exciting that the film was located, but I’m a little disappointed I didn’t find it myself. Luckily, it’s in excellent shape,” said Adriaans of Nijmegen, who made three annual trips to Albany, beginning in 2013. She scoured local museums and archives and spoke to several groups, including the Dutch Settlers Society, in hopes of solving the mystery.

She will introduce a screening of the long-lost film on Monday during a festival of cinema sponsored by the Nijmegen film society.

“There’s a lot of interest in the film here because of the long connection between Albany and Nijmegen,” Adriaans said. “We didn’t talk about the war for a long time because of the sadness over all we lost.”

The film was an expression of gratitude from a thankful Dutch city, heavily damaged in fighting to rid the city of German occupiers led by the U.S. 82nd Airborne Division in September 1944. Among Nijmegen’s populace of 120,000, more than 2,200 civilians were killed and 5,500 critically wounded; 2,260 homes destroyed and 1,300 damaged; and 400 streets ruined. Three-quarters of the historic center of the city was reduced to rubble.

Albany adopted Nijmegen as a sister city after the war and residents gathered 300 tons of food, vitamins, pots and pans, medical supplies, clothing, shoes, toys, window glass, building materials and other goods valued at nearly $1 million. The humanitarian aid was loaded onto the cargo ship Westerdam at the Port of Albany on July 9, 1947. Time magazinepublished photos and Albany’s assistance gained national attention.

The civic generosity of the Dutch-settled city of Albany was spearheaded by Mayor Erastus Corning 2nd, an Army private who returned from combat in Europe in September 1945 after he witnessed the ravages of World War II

“This is Nijmegen” was last shown for several days in January 1950 at seven theaters across Albany: the Strand, Ritz, Madison, Delaware, Paramount, Eagle and Royal. An estimated 50,000 moviegoers watched the arrival unloading of the Westerdam in Nijmegen in 1947, along with still photos of the historic city before and after the wartime destruction.

American bombardments and an Allied offensive led by the 82nd Airborne drove the German army out of their last line of defense in the strategic city.

The film was shown in Albany to generate additional donations for Nijmegen’s postwar reconstruction. Several residents of Albany forged deep friendships with citizens of Nijmegen.

A researcher interviewed an 84-year-old Nijmegen woman, Mrs. G. Wouters, who recalled watching paratroopers dropping into the city to begin its liberation in 1944. She was a teenager who took refuge from the bombing at her grandmother’s house and the force of an explosion blew her under a table. She remembered when her mother brought home a bundle of clothing from the Albany aid shipment.

“I got a red winter coat with a beautiful fur collar,” Wouters recalled. “I was very proud of it. I also got a stunning white ‘big girls’ dress with an embroidered emblem. The dress was too big, but I wore it many times when I got older. It was the most beautiful piece of clothing I ever owned.”

She saved a photo of herself wearing the dress with her husband, Joseph Weesenaar, in the summer of 1948. The Albany woman who donated the red winter coat put a letter inside and Wouters corresponded with her for years and she visited the family in Nijmegen.

The researchers also interviewed John Leesberg, of Nijmegen, who’s in his 80s. He still has an Underwood typewriter that came in the 1947 Albany shipment and saved the career of his father, a lawyer, whose office was destroyed in the bombing.

Adriaans was formerly affiliated as an independent scholar at Radboud University in Nijmegen. She is the founder and president of Friendship Albany Nijmegen, a volunteer organization that hopes to publish a commemorative magazine about the Albany-Nijmegen bond. Their plans also include developing an exhibit that would include the film, which could be displayed in both cities in 2017, the 70th anniversary of Albany’s humanitarian aid shipment.

The discovered copy of “This is Nijmegen” is silent and does not include the soundtrack. Adriaans previously uncovered a script with the film’s narration and interviews. There is also a stirring Dutch song played on the soundtrack titled “The Mayor Corning March.”

Adriaans vowed to continue her search. She has documentation that at least two copies of the film that included the soundtrack were sent to Albany.

She searched as recently as last summer through archives at the Albany Institute of History & Art, the State Library, Albany County Hall of Records and other local collections — all to no avail.

“I’d like to go back to keep looking,” Adriaans said. “It’s a wonderful story. I’ve made it my mission and I’m not finished yet.”

To learn more about the Albany-Nijmegen connection, to the Friendship Albany Nijmegen website, https://stichtingfan.nl