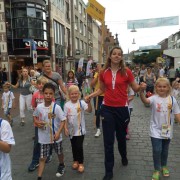 Inside the white marble Gothic grandeur of the 13th-century St. Stevens Church in the heart of the oldest city in the Netherlands, hundreds of people from many countries celebrated the 100th anniversary of the “Walk of the World” in prayer and song.

After an ecumenical service led by a Catholic priest and Protestant minister, a choir, orchestra, organist and trumpet player led a rousing rendition of a 1932 marching song written for the event, “Vierdaagselied.”

The Dutch lyrics spoke of walking together through the countryside in peace, unity and camaraderie.

One of the strongest voices belonged to Bert van der Lans, 84, a retired banker from Nijmegen. He proudly wore a No. 68 on his marching medal and ribbon. That signified he had participated in the walk each year without fail since 1948.

“I march because I remember the bad years, the war years,” he said through a translator. He was an adolescent during World War II and came to live in Nijmegen after his family was forcefully relocated by German soldiers from their home in The Hague in the spring of 1944. A few months later, the U.S. 82nd Airborne Division and Allied forces liberated the German-occupied city in September, 1944.

Intense Allied bombing and heavy fighting against German troops exacted a terrible toll on Nijmegen: 2,200 civilians killed and 5,500 injured, 3,560 homes destroyed or badly damaged and three-quarters of the city center reduced to rubble.

“It was a very difficult time,” van der Lans said softly. He was given a place of honor for this year’s centennial event as the “oldest walker.” He intended to walk the 30-kilometer (18-mile) distance as a nod to his advancing age. For decades, he had completed the 50-kilometer (31-mile) loop.

He remembered the arrival of 300 tons of humanitarian supplies donated by citizens of Albany that arrived aboard the cargo ship Westerdam at the docks in Nijmegen in July, 1947.

“We were so grateful to Albany,” he said, and recalled 20,000 pairs of shoes and winter overshoes from the Albany shoe store Swartz & Levison among the shipment. The new shoes were particularly useful to Nijmegen residents that winter after their liberation.

The strong Dutch traits of ingenuity, cooperation and conviviality — which Nijmegen’s sister city of Albany would do well to emulate — were on display for Saturday’s opening night of “The Party of the Year.” The seven-day extravaganza is spread across 38 stages set up in public squares and parks across the city. This festival serves as the nighttime entertainment complement to the 50,000 daytime walkers from 100 countries who come for the four-day marches. In other words, the party never ends since the bars don’t close and the beer never stops flowing.

“We try to offer something for everybody to enjoy,” said Walter Hamers, chairman of the not-for-profit organization that organizes the party events and hires the 4,500 artists and performers who provide around-the-clock music and excitement. It runs the gamut from 40 international theater acts to stages devoted to jazz, rock, funk, salsa and traditional Dutch music. A classical orchestra performed in an underground parking garage.

On Saturday night, for example, 190,000 visitors thronged to the free festivities, which more than doubled Nijmegen’s permanent population of 170,000. The weeklong event’s $1.5 million budget comes in equal thirds from corporate sponsors; licensing fees from food trucks, bars and restaurants; and municipal government funds. The organizers’ paid staff of six, 200 volunteers and hundreds of bars, restaurants and small businesses team up to build creative stages and unique performing venues.

“It is a unique method people have studied and called the business model of Nijmegen,” Hamers said.

It helps that Nijmegen, which stretches along the River Waal not unlike Albany along the Hudson, has 25,000-square feet of public squares and parks. That is more public space per capita than any other city in Holland, including Amsterdam.

Hamers, 60, who grew up in a village nearby, studied how public institutions work at Radboud University in Nijmegen. He accepted the voluntary chairmanship position this year because of his interest in social welfare. He is CEO of Talis, the largest public housing not-for-profit corporation in Nijmegen. It operates 14,000 low-income apartment units in buildings worth $1.4 billion around the city.

“Nijmegen has always been a social town because of the university. I am interested in helping to extend that sociability,” Hamers said. “The walkers created a community that we have merged with the festival-goers. The 50,000 walkers draw 200,000 spectators around the countryside and they join our 200,000 partiers at night.'”

He paused and added: “We like to consider ourselves the Tour de France for walking.”

Such massive crowds can create logistical nightmares, which is where the scientific and technical side of the Dutch character shines. For starters, they add 350 extra trains, which disgorge thousands of people at the central station who walk a short way to the entertainment.

Also, the Dutch are a great bicycling culture, and 6,000 temporary spaces for bike parking were added this year to several thousand spaces in permanent bike stands.

When downtown homeowners complained about public urination, festival organizers partnered with an entrepreneurial chemical company. They coat the lower portions of the walls of brick houses near the entertainment venues with a clear, environmentally sensitive coating that is impervious to liquid (specifically urine).

“The urine splashes back at men if they try to go against the side of the building and it is a wonderful deterrent,” Hamers said with a sly chuckle.

A single splash-back incident re-directs chastened revelers to one of hundreds of high-tech outdoor urinals. The urine is collected in large containers and trucked to a facility that separates the ammonium sulfates. That, in turn, is made into fertilizer. Urine recycled from the festival generates enough fertilizer to cover dozens of acres of farmland. A local dairy farmer who produces artisanal cheeses uses the urine-based fertilizer and promoted his organic artisanal cheeses at a farm-to-table, free sit-down lunch for dozens of guests at the festival.

“You see, we are all enjoying the success of the urine recycling project,” Hamers said, as he forked into a plate of local cheese.

Similarly, the 5 million special plastic beer cups and wine glasses used at the festival are all collected and recycled at a nearby facility. The recycling process creates electricity that is used to power the 38 stages.

In addition, extensive security measures employ other ingenious methods that harness Dutch technology, surveillance cameras, crowd psychology and low-key, convivial policing methods. Hamers said statistics have shown that the festival produces no more crime than on a typical weekend in the city.

“People in Nijmegen grew up with this tradition since they were young children and they work hard to keep the events friendly and peaceful,” Hamers said. “We take pride in organizing such a large event that builds community and is sustainable in every way.”