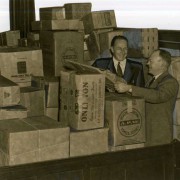 I’ve headed to Nijmegen to join 50,000 of my soon-to-be closest perambulating friends from 100 countries and the 2 million revelers who will cheer us on.

We will transform the oldest city in the Netherlands into the biggest summer bash in Europe.

The weeklong attraction that kicked off Saturday is the 100th anniversary of “Walk of the World.” The massive movable party is centered on a four-day program of 20- to 50-kilometer walks, Tuesday through Friday, led by teams of walkers who dress up in colorful garb, wave their country’s flag, bang drums and generate infectious merriment.

The bars stay open around the clock.

The Dutch pronounce their city NYE-may-gun, and give it a guttural flourish.

Nijmegen (population 165,000) is Albany’s sister city. The two share a connection that stretches across more than 400 years. Adventurous members of old Nijmegen families joined other risk-taking colonists and sailed across an ocean, bound for Amsterdam diamond merchant Kiliaen van Rensselaer’s sprawling Dutch patroonship on both sides of the Hudson River. They settled in 17th-century Beverwyck, the forerunner of Albany.

The bond deepened after World War II when Albany residents in 1947 donated 300 tons of supplies valued at $1 million.

The humanitarian shipment of food, vitamins, pots and pans, medical supplies, clothing, shoes, toys, window glass, building materials and other goods was collected door to door and loaded onto the cargo ship Westerdam. It steamed out of the Port of Albany on July 4, 1947 and reached Nijmegen at its nadir. They city was liberated by the American 82nd Airborne Division and Allied troops in September 1944 after heavy bombardment and intense fighting with the German Army.

In the war-battered city, 2,200 citizens were killed and 5,500 were critically wounded, 3,560 homes were destroyed or severely damaged and the historic center of the city was reduced to rubble.

The Times Union sent a reporter and photographer to document the 1947 humanitarian shipment and the resilience of the Dutch people.

“There is grief for all that we lost in the war. Nijmegen still has the feel of a city’s broken heart. But there is overwhelming gratitude for the American soldiers, and the citizens of Albany,” said Anja Adriaans, an independent scholar who has researched the sister city connection and who founded the Friendship Albany-Nijmegen group in the Dutch city.

To thank Albany for the shipload of relief supplies, the citizens of Nijmegen sent a gift.

They had very little left after the war, so they shipped a few thousand tulip bulbs. They were planted in Albany’s Washington Park and in the spring of 1948 they bloomed during what became the city’s first Tulip Festival.

Schoolchildren in Nijmegen and Albany became pen pals in 1947. They mailed letters back and forth. Some of those schoolchildren, who are now in their 70s and 80s, became lifelong friends.

I’ve traveled to Nijmegen to join the big walking celebration, but also to retrace that shared history and to hear the stories from Dutch folks who survived the war and whose lives were made better by Albany’s kindheartedness 69 years ago.

The “Walk of the World” is sponsored by the Arnhem-Nijmegen regional tourism board, which picked up the tab for airfare and a hotel room for myself and reporters from Italy, Germany and the U.K.

This walkapalooza began after World War I. Soldiers from Holland and neighboring countries laid down their arms and marched together through the Dutch countryside in peace, harmony and camaraderie.

Dutch lager was shared. There was singing. It went well. The four days of marches grew and grew until it reached the level of today’s spectacle: a $2 million euro, nonstop celebration with 2,750 entertainers performing on 37 stages that rocks the Arnhem-Nijmegen region along the German border.

The Dutch cherish their walking ritual. During the Nazi occupation, defiant citizens continued their marches.

A contingent of 25 ultra-walkers this year will do double circuits of the 50K loop, a 100-kilometer centennial marathon that will cover 62 miles daily. They will sleep three or four hours before stepping off again.

The avid walkers are members of the IML Walking Association, formerly the International Marching League, which sponsors multi-day walks across Europe.

Their Latin slogan is Nos jungat ambulare, or May walking bring us together.

Blistered, bandaged-foot selfies emerged as a meme in online photos of past “Walk of the World” events.

The partying is world class, too. King Willem-Alexander is expected to attend.

The taverns never close. “The serious walkers begin at 4 a.m. and people pour out of the bars to cheer them on,” saidJeroen von Wieringen, press officer of the regional tourism board that organizes the event.

“Yes, they are a little drunk by then, and there is singing,” von Wieringen said. He spoke from a Bluetooth-enabled cellphone as he pedaled his bicycle from his office downtown to his home in the countryside after work.

He described what he saw: streams of locals and visitors in hiking boots, walking around the city, training for the kilometers to come.

“Everyone is getting very excited,” von Wieringen said Wednesday.

Thousands of latecomers have been turned away after reservations were capped weeks ago at 50,000. Campsites, hotels and B&Bs are booked across the region. Those who can’t find a place to sleep can seek refuge among hospitable residents.

“We invite visitors into our homes if we have extra room. No charge,” von Wieringen said.

Albany is a city of immigrants, settled by the Dutch.

You can find the Dutch influence today in Albany’s street names, at historic sites and among descendants of early Dutch settlers such as the van Rensselaers, Ten Broecks, Ten Eycks, Schuylers and others. They forged Albany’s Colonial history and built a city upon timeless values of diversity, tolerance and free trade.

In Nijmegen, we will walk together and talk of shared history, and of sister cities on both sides of the Atlantic.

There will be Dutch lager.