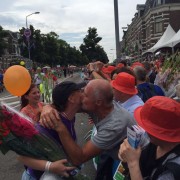 Lashed by pounding rains and raked by violent thunderstorms throughout the morning, the masses marched on with the triumphant spirit of warriors toward the 50-kilometer finish line of the Walk of the World on Friday in Albany’s sister city.

As they turned into the cobblestoned city center for the fourth and final day, thousands cheered this colorful parade of nearly 50,000 strong united in peace and camaraderie and the joy of perambulation.

By early afternoon, the sun had emerged and the celebration began for the 100th anniversary of the oldest and largest four-day march of its kind anywhere in the world. The crowd whooped and hollered and did the wave in the fashion of American football stadiums as the marchers passed. They were kissed on the cheeks and high-fived. Two teenage Dutch girls held up a sign that read: “Free Hugs.”

The centennial spectacle drew King Willem-Alexander of the Netherlands, who shook the hands of marchers and passed out orange gladioluses — the color of the royal family and the event’s traditional flower for the past century.

The roadway leading to the finish was lined with thousands of bleachers and christened “Via Gladiola” for the event.

“We all just kept going through the rain and the lightning,” said Raymond Lamars, 57, a Dutch IT worker who finished his third 50K march. “It’s an unbelievable finish to a fantastic event. People cheered us all along the route. They gave us the strength to finish.”

Nijmegen is the oldest city in the Netherlands, settled 2,000 years ago by the Romans, and the gladioluses hark back to Roman times. It was this same hardy, spear-like and colorful flower that was showered upon Roman gladiators who returned to their encampment here after a sojourn as soldiers.

And so on Friday, these peacetime marchers received a hero’s welcome that felt like Mardi Gras, carnival and the finish of the New York City Marathon all rolled into one.

“It is tremendous. There is nothing like it anywhere,” said Roy Martinez, 57, who waved the flag of Bonaire, an island in the Caribbean and municipality of the Netherlands. He flew here to participate in the Walk of the World for the 12th consecutive time.

The connection between Nijmegen and Albany reaches back more than 400 years to the city’s original Dutch settlers. In Colonial times, Albany was a Dutch colony known as Beverwyck, a Dutch term for beaver trading outpost. The English took control later in the 17th century and renamed it Albany after an English duke.

In 1947, 300 tons of humanitarian supplies were collected from Albany’s citizens and shipped to Nijmegen to help rebuild the city that was destroyed by bombing and fighting. In gratitude, the Dutch sent a shipment of tulip bulbs, which were planted in Albany’s Washington Park, leading to the city’s first Tulip Festival in 1948.

Nick Smits, a 10-year-old Dutch boy, handed a bouquet of orange gladioluses to his uncle, Remco van Gaal, 41, who completed his first 50K walk. “He’s my hero,” the boy said.

“I’m so proud of him,” said Gaal’s sister, Esther Smits, who lives outside Nijmegen. “He trained hard for this, but he said it was worth the effort to be greeted with a party like this.”

Along the parade route, revelers were pressed against metal barricades five or six deep and they waved signs, sang traditional Dutch songs and raised a jubilant ruckus with thousands of plastic clapping-hand noisemakers. Every 10 or 15 minutes, a local oompah band joined the walkers and struck up a soundtrack of crashing cymbals, pounding drums and raucous revelry.

There were scores of touching scenes near the finish line: a dozen Special Olympics walkers drew a loud cheer, as did several paraplegic participants in wheelchairs.

Many dressed up in goofy costumes. One dude clomped along in traditional wooden Dutch shoes and a pink wig. A young woman swapped out her boots and hiking shorts for black high heels and a white mini-skirt. A couple from England changed into Batman and Robin costumes.

“Nijmegen is like nowhere else in the world,” said Neil Angie, of Somerset, England, who completed his 11th walk as Batman.

“It’s fantastic,” said his wife, Coultas, a nine-year walking veteran who chose to finish as Robin this year.

“This is a beautiful completion to a four-day party,” said Faan Parritleuwean, who lives in Rotterdam and is originally from a Dutch colony in Indonesia. He and his wife, Henny, both 56, completed their 15th march and were greeted by friends and family who gave them orange gladioluses and ice-cold Amstel Lights.

Dutch lager appeared to be the celebratory drink of choice for these modern-day heroes, although some of the old-timers remembered decades ago when marchers each morning downed a concoction known as “bull’s milk.” The drink is made with a whipped raw egg, milk, sugar and a generous splash of cognac and purportedly enhanced one’s endurance.

No bull’s milk was necessary for super-fit Henk Huistjes, 74, a retired potato farmer from Emmeloord in northern Holland. He swept two of his 11 grandchildren into his arms and laughed as they hung from his neck and kissed him. They had made small signs that read “Super Opa Henk!,” or Super Grandpa Henk.

“It was a great four-day march, one of the all-time best,” said Huistjes, a fitness buff who walks 50K each Saturday. He also completes an annual 80K walk that grew out of a challenge by President John F. Kennedy and was widely adopted in Holland.

As the oompah bands drummed on, the marchers looked up at the finish line and read a large banner, “Hope to see you next year.”

“The Walk of the World” is hard to describe, but easy to love. It touches the heart as much as it blisters the feet.

As the long shadows of late afternoon entwined the walkers, glittery confetti floated to the road and orange gladioluses were enfolded in a thousand arms, the 100th edition of the Walk of the World was a timeless testament to kinship.

And yet the party was only beginning. It would go on until sunrise, with music and singing and celebrating the heroes.

“Proost” as they say in Dutch. Cheers.